Audi quattro…. An update from the owner 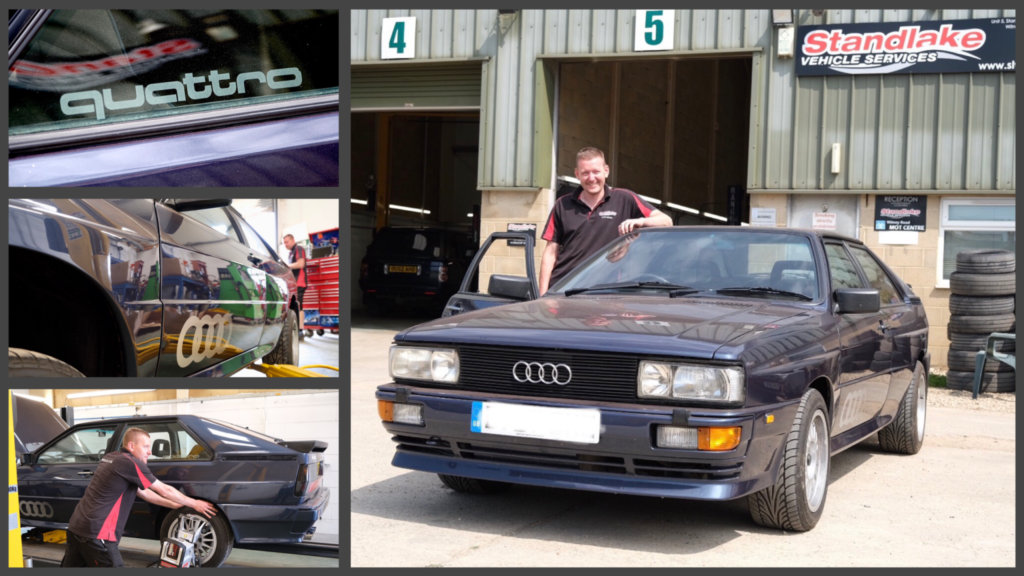 I remember one of my friends using an analogy that anything that’s sought after, is 30 years old, WHY? It is what you wanted before you were crippled with a mortgage and were blessed with children. There comes a point in life’s journey when enthusiasts seek out, through rose tinted spectacles, what they desired in days gone by but we’re beyond reach. Market trends would show that there’s support for that argument – albeit that some cultural ‘icons’ in fashion and music are best forgotten from that era ………….

I’ve known Dereck for a fair few years now having met him at some motorcycles trials competitions that we’d ridden; some mutual friends recommended his professional services and it was reassuring to see how he undertook tasks and maintenance on our daily vehicles. He became the ‘go to’ professional for our motoring needs.

In chatting to him one day, I took a trip ‘down Memory Lane’ and enthused about the Audi ‘Ur’ quattro of old, as I held it as one of my bucket list aspirations. Dereck’s enthusiasm was evident, and he talked about working on them in his younger Volkswagen Audi Group days, when the older mechanics had become all but dismissive of them.

Apparently, it was one of two ‘poster cars’ that he admired as a youth and he said that it would be nice to work on one again – without him knowing it, Dereck had passed the interview and I gave into the 30 year rule and went off to find one ……. it was unlikely that his other poster car – a Ferrari F40 was ever going to end up on my drive, my pockets only having a certain depth!

Our Amazon Blue, 1984 WR spec quattro arrived in the week before the first national pandemic lockdown and it was pressed into use as our vehicle for ‘essential journeys’. When the situation eased, Dereck found a moment to invite it into the workshop for an appraisal. It was quite clear that he knew where to look and his opinion was that we’d bought a sound example with only a couple of jobs needing attention (lower ball joint, pair of suspension bushes and a CV joint which was arthritic); with a stroke of his chin he did add a ‘however’ …… to bring it forward (if it were his), he’d look at changing the suspension strut bump stops and gaiters which had become deteriorated by age but didn’t feature as MOT issues.

Given that the rest of the car was sound, we slid down the rabbit hole that is classic vehicle ownership and undertook a complete suspension refresh and injector overhaul that featured on his website. Dereck’s work was first rate, his enthusiasm and application was confidence inspiring and the costs involved were transparent and very reasonable. His comment after his initial test was ‘that’s how they felt when they were new’. We couldn’t have asked for more.

Classic vehicle ownership is fired by passion that has to be moderated with a business-like mindset; we are after all, just custodians and at some point, our pride and joy gets passed on to another owner. One of the factors to consider when selecting the right example is how it’s been looked after and by whom; there needs to be credibility with evidence to support the vehicle history. Also, to enjoy the vehicle, they have to be driven and maintained as befits their performance and value.

If we are to hark back to the “30 year rule”, prospective owners need to seek out enthusiastic professionals with relevant experience who they can enlist to look after their classic motoring needs; a positive relationship and trust is essential; experience of the systems and components is vital (modern techs would quail at a fault with the K-Jetronic system which doesn’t come with laptop diagnosis ….) Experience outweighs Internet forum ‘expertise and opinions.

Dereck is a fine example of the new breed of mechanical engineer who can bring forward ownership and investment confidence to vehicles in the ever-evolving market. Prospective owners would do well to seek out his services, we count ourselves fortunate to have him in our network of trusted professionals (and he doesn’t just know quattro’s…..).

PrevPreviousKeep your vehicle’s battery healthy- don’t get caught out in the cold this winter!
NextFreezing temperaturesNext